Wow. It's Saturday. I lose track of days out here with nothing to mark them but differentiated weather. Is it still overcast? Yes. Is that fog or a rampant cloud? Funny, how soon I have adapted to life without people (except of course for my work partner here on the station). Yesterday, I had some yahoo hikers sitting outside that reminded me of life at the condo. Why do people have no respect for what's going on around them? Today I had to tell a woman, mid-twenties at least, not to perch on the uppermost rings of the light. "Oh, can't we climb up here? I thought we could climb on the lighthouse"? Yes. Well.

Apart from routine duties and watching out for silly hikers, I've been working on my garageband and iMovie skills. What follows is my very first movie soundtrack--it's really just me playing around on a synthesizer (thanks again Ivan) and recording several tracks--but I needed to learn how to do that. It's called "Cape Scott Days" and really just chronicles my journey into this station and a little bit about what it looks like around here.

There are two wonderful cats here, who I'm quite fond of, and who have convinced me that when I get my own station a feline, perhaps a Bengal, will be resident there. I talk to them and cuddle them and between the three of us, life is grand.

One of my duties is to take a pail of their cat litter and my compost about a mile through the forest to dispose of it. Well, I went off the other day singing, "she's walking with her cat litter, she's ok" --it was something like a Monty Python movie loop--and all the while thinking that I was walking alone in bear/wolf/cougar country carrying a basket of goodies. I made it back, of course, but that same evening I had my first glimpse of a bear in the backyard.

I was actually talking to Tara on Skype when I happened to look out the window and saw him standing up getting a drink out of the rain barrel by the greenhouse. I almost dropped my iPad and after much fumbling managed to get a snatch of video. The next day, I asked my boss to let me fire the bear banger, so I'd know how it worked and felt when it went off. Ah pyrotechnics! I don't want to be fumbling with the bear banger when he's standing in front of me. This lifestyle suits me. I feel it. Hurray.


PS. Due to uploading challenges, it's best to view this as is. Blowing it up affects the picture quality. If this keeps up I'll be needing a Youtube page:)

When 1,000 year old ancestral remains were unearthed at Nootka Light Station in 2018, Mowachaht/Muchalaht elders made plans to reinter them... 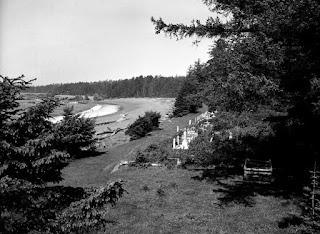 Ladyhawke
Pacific Coast, Canada
my adventures working for the Coast Guard as a lighthouse keeper on the BC lights